This week has been just one of those weeks.

I think I’m starting to notice a trend.

It started out well enough.

Sunday Patrick and I spent the afternoon at the park celebrating our nephew’s first birthday. The wind was a little cold, but overall it was a beautiful day to be outside and of course it was fun to watch little Mason toddle around and open presents. He is growing up so fast. In some ways it seems like just yesterday we were getting to meet him for the first time, but then again it sort of feels like we have lived about 8 lifetimes since then. There were only a few moments where I felt a little sad that Patrick and I wouldn’t be planning a first birthday party next year. It’s hard to not let that sadness creep in. I tried to stay focused on our sweet little nephew and not think about how he should be getting ready to have a baby cousin to play with any day now. We were so excited that him and Josh would be almost exactly one year apart and how fun it would be to watch them grow up together and hopefully be the best of friends in a way only cousins can. Overall, I think I did pretty good at fighting off the gloom and choosing to cherish the joyful moments of watching him get excited over presents and carefully pick the frosting off his little cake. I love that kiddo so much! It’s weird how if I see a random stranger with a little baby boy I get a bit sad, but there is something about family. Mason brings joy to places of my heart that are very broken right now. I love that about family. 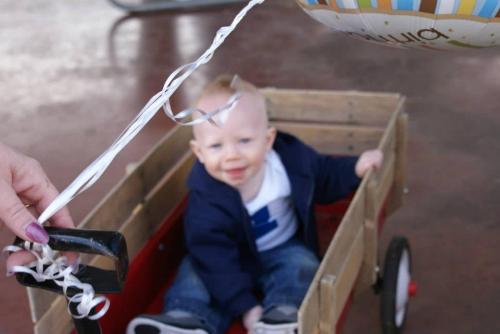 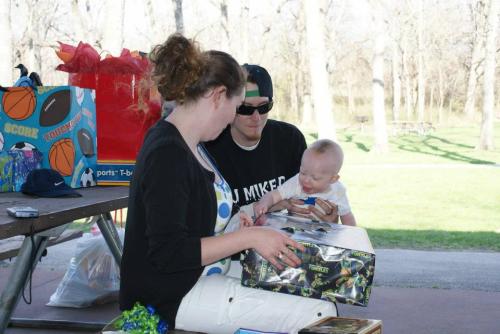 Then Monday hit with a vengeance as the grief took over and I was forced to surrender to it once again. Of course Monday ended with a rainbow which was a nice reminder that even on the gloomiest of days there will always be beauty and peace if I’m just willing to look hard enough to see it.

Wednesday was a day that ended with me crying myself to sleep. I think this week full of birthdays (Mason’s on Monday and my sister’s on Thursday) kind of crashed down on me as I was making my sister’s birthday cake on Wednesday night.

Baking a birthday cake for my sister tomorrow. Realizing I’ll never make one for Josh. It’s the little things that seem to hurt the most. :(

Just like the cookies I baked two weeks ago, I wondered what kind of cake Josh would want for his birthdays? Would he always want the same kind or would he have lots of favorites? It really is the little things that seem to get me down the most. By the time I was done with the cake (which was an awesome polk-a-dot cake that I will have to tell you about later), I was pretty much just done for the night and had to head off to bed early where I spent some much needed time in prayer and tears. It seems like that is most often how I pray these days. It always starts out with actual words, but ends up with just tears.  I’m literally crying out to God for answers, for peace, for signs, for hope, for love, for anything that will bring some relief from this awful pain and grief that holds me so tightly within its grip.

Thursday was my sister, Cathy’s birthday. The family was coming over to my house for dinner (homemade Jack Stack BBQ – pulled pork sandwiches, cheesy corn, baked beans, coleslaw, fries, and cake). I was ready to just be around family and enjoy a lighthearted, easy, happy day.

But of course life often has other plans. Thursday was another reminder of what we’ll never have with Josh since it was “take your kids to work” day a couple of people brought in their grandchildren. And while they were a bit older, it was still just one more reminder that I didn’t feel like seeing.

“Losing a child is not experiencing only one death, but rather the loss of a child is also experiencing several other deaths, too. There is the death of future experiences with your child. The death of dreams. The death of a future as you had imagined it would be. The death of the person you were before child loss. Sometimes, it is the death of a marriage due to all of the strain your marriage has faced since child loss. And, on and on it goes. One death? Not by any means! When the death of a child occurs, there are many other associated deaths that we must deal with. Is it any wonder that parents and families who must walk this journey of child loss “die a thousand deaths?” Truer words have never beens spoken!” – Silent Grief – Child Loss Support

Then to top it off Thursday, my boss, whose wife has been fighting cancer for a while now, told me that they were finally out of options for her and now it was just about making her comfortable. I told him I was just so sorry as I quickly left his office so he wouldn’t see me burst into tears.

I am so sick of death. That may sound like a stupid thing to say, but it’s true. The news each night is filled with so much tragedy. Every time I log onto to Facebook it seems as if some friend is asking for prayers as they have recently lost a parent, grandparent, sibling, friend, etc. I’m connected to several groups for parents who have lost a child and everyday there are new members. I’m just so tired of death. Each one seems to make grief’s grip on my heart a little bit tighter as I feel so much pain for everyone that is hurting.

I don’t know why God has blessed me with the gift of empathy, and frankly some days it feels more like a curse, but I have always had a heart for people who were struggling. I’ve always wanted to be the one they could turn to when times got tough. I’ve spent many nights in prayer and tears for friends and family who have suffered through some of life’s toughest situations. I’ve always been able to feel the pain of others, and I like to think that one of my spiritual gifts is being able to empathize with people and being able to support and minister to those who are hurting. Losing Josh has only made me that much more aware of the pain that others feel.

I know I’m being called to do something with this “gift” of empathy and compassion for people, but I’m just not sure what it is yet. All I know is that this week has been a trial. It has been filled with just enough joy to keep me breathing, but it has taken a lot out of me. I’m thankful that today is Friday (side note: this is the first full week I’ve worked since I’ve been back. Which means this is the first week I’ve worked all five days since February 11-15 – crazy). I’m ready for a weekend of rest and recharging. I cherish the quiet weekends at home with Patrick. I’m just praying that the next couple of weeks (due date and Mother’s Day) will go smoother than I am expecting. I’m ready to get through them and past this horrible fear  and dread I have of them right now. 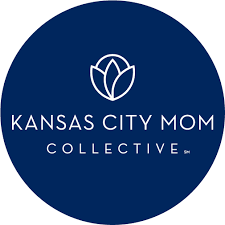